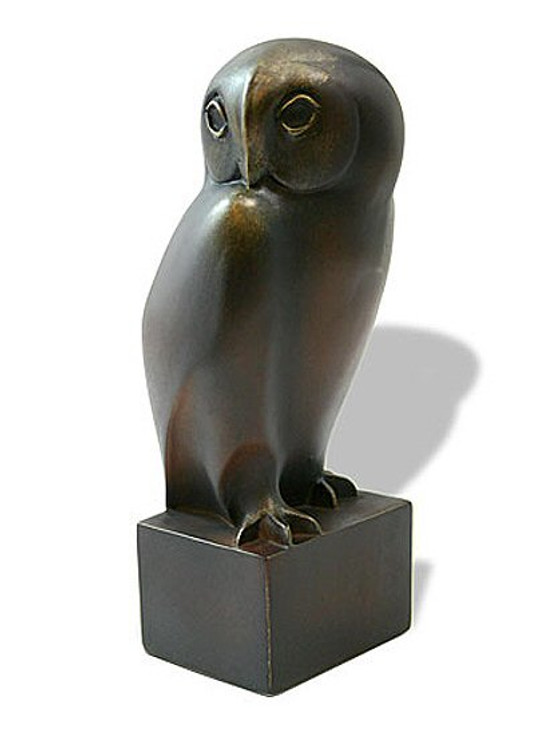 Owl Sculpture by Francois Pompon. FRANCOIS POMPON (1855-1933), French sculptor, student of Rodin and famous for his stylized animal figures. Receiving encouragement from Rodin, he produced some stunning works such as the Polar Bear shown at the 1922 Salon d'Automne. By the age of 67, he had become famous and produced many other masterpieces during the last ten years of his career.

ABOUT THE ARTIST: Pompon was born in Saulieu in French Burgundy as the son of a carpenter. At his fifteenth he takes service with a stonemason in Dijon where he learns the principles of sculpting and attends evening classes at l'Ecole des Beaux Arts.
Five years later he goes to Paris where he also works for a stonemason in Montparnasse during the daytime and attends evening classes at l'Ecole Nationale des Arts Decoratif. Later he contributes to new decorations for the Hotel de Ville which had been set on fire in the time of the Commune. During his education he meets Pierre-Louis Rouillard, a sculptor of animal figures who possibly became a source of inspiration for the work which would make him famous later on.
In 1882 he marries Berthe Valain, who, like his mother, worked as a couturier. He tries to build his own oeuvre and although his first major sculpture Cosette draws the attention of the salon-jury; an independent sculpting career seems far away. He ends up taking service with Rodin where he becomes head of his studio three years later.
From 1896 he starts doing a lot of work for Renee de Saint-Mareaux a famous sculptor of the time. Pompom does this until Mareaux's death in 1916.
He also continues searching for his own style, in which his preference for sculpting outdoors plays a big part. For this purpose, he develops an ingenious mobile sculpting-unit. His membership of the Bande a Schnegg, a group of sculptors involved with Rodinís studio is of great influence too. Collectively they search for new stylized shapes, based on the monumental serenity of classical sculpture. In addition, Pompom starts to focus more and more on animal figures, but his work remains unappreciated and so he goes through a bad patch.
It is not until 1919 that his work starts attracting more interest. He sells a stone sculpture of a turtledove to Musee de Luxembourg and two years later three plaster animal figures to Musee de Grenoble. Not until he is 67 years old does he get his final breakthrough with the exhibition of l'Ours Blanc in plaster at the Salon des Artistes Franais. Successful exhibitions follow in Tokyo and Osaka and the ice bear, which had become famous by then, is produced in marble. The museum of Saint-Omer buys several of his pieces and in 1929 the ice bear finds a permanent place in Musee de Luxembourg.
Upon his death, Pompom left nearly 300 pieces to the French state which were eventually displayed at the Musee des Beaux Arts in Dijon. The Musee d'Orsay in Paris has a large collection of plaster models.

MSRP:
Sale Price: Sale Price: $31.95
Reg Price: $46.95
This miniature Owl Bird statue by Francois Pompon is a petite rendition of a famous museum statue and is part of the Parastone Museum collection. It is made from resin with hand painted details...

MSRP:
Sale Price: Sale Price: $31.95
Reg Price: $46.95
This miniature Owl Bird statue by Francois Pompon is a petite rendition of a famous museum statue and is part of the Parastone Museum collection. It is made from resin with hand painted details...