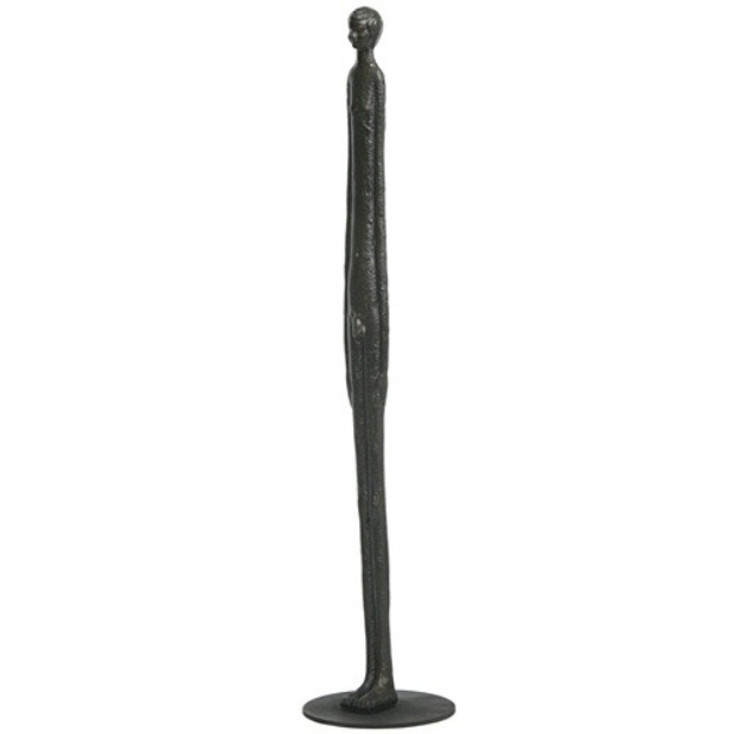 12.5" Elongated Etruscan Boy Thin Statue. The slender figure of an Etruscan boy became the most famous stretched figure thanked to the story of its discovery; a farmer found the figure while working his land near Volterra in 1870. He used it as a fire poker for years. Many artists have taken inspiration from the beautiful, abstract forms of the famous Etruscan stretched figures. In pre-Roman Italy what we know today as Tuscany was inhabited by the Etruscans, a people who developed their own distinctive culture from the 8th century BC. The Etruscans earned their considerable wealth through overseas trade in ceramics, wine and iron. They were notorious pirates. From the 5th century, they were increasingly attracted by the Celts from one side and the Italians from the other. A fleet from Syracuse destroyed their seaports, which was the start of the gradual decline of the independent Etruscan culture. By the 3rd century, the Etruscans had come under Roman Rule. Inspired by the large Greek statues of nude men (kouroi) and clothed women (korai), a flourishing tradition developed in Etruria. However, in contrast to the Greeks, the Etruscans did not seek to perfectly represent the human body. They emphasized the appearance of their sculptures in an almost expressionistic way. The peak of this obstinate conception of art was reached with the so-called stretched figures: elongated, flat figures, usually made between the 5th and the 2nd century BC. They originated in Southern Etruria, where small figures were cut from thin sheets of metal starting in the 8th century. The Etruscan culture had unmistakable Greek influences, and formed the basis for much of the later Roman culture. The Etruscans long remained an intriguing, almost mythical people for the Roman elite. Statue replica is from the highly collectible Parastone Mouseion 3D Collection . Material : Collectible quality bonded bronze (resin and bronze), matte and glossy finish. Included : Full color card in four languages.

MSRP:
Sale Price: Sale Price: $30.95
Reg Price: $49.95
Use this 12.5" Ivory Linen Lamp Shade to give your lamp a trendy look. This linen fabric shade is a simple easy choice for your home's lamps. It is made with high quality materials and is the perfect...

MSRP:
Sale Price: Sale Price: $92.50
Reg Price: $132.28
This charming 23.5" Boy Sitting on a Rock Statue will bring back memories and put a smile on your face every time you look at it. Features delightful details and antique finish. Accentuate your...

MSRP:
Sale Price: Sale Price: $31.95
Reg Price: $46.95
This miniature The Thinker statue by Auguste Rodin is a petite rendition of a famous museum statue and is part of the Parastone Museum collection. It is made from resin with hand painted details...

MSRP:
Sale Price: Sale Price: $76.31
Reg Price: $109.13
Make an exquisite addition to the home with this 12.5" Iron Watering Can. This watering can will bring farmhouse charm to any space. Perfect for dried flowers, utensils or crafting supplies. Display...

MSRP:
Sale Price: Sale Price: $59.99
Reg Price: $89.99
44" U.S. Navy Seabees Blue Round Mat. Looking for a unique rug to decorate your home or office with? This 44" round mat is a great show stopper that is practical and displays your military branch...

MSRP:
Sale Price: Sale Price: $59.99
Reg Price: $89.99
44" U.S. Coast Guard Red Round Mat. Looking for a unique rug to decorate your home or office with? This 44" round mat is a great show stopper that is practical and displays your military branch pride...

MSRP:
Sale Price: Sale Price: $24.99
Reg Price: $39.99
Add visual interest to your child's room with this Noah's Ark porcelain coin bank. This piggy bank is a stylish way to have your kids save their change while making a delightful addition to your home...

MSRP:
Sale Price: Sale Price: $205.95
Reg Price: $288.95
Give your wall decor a high grade look when you hang this detailed oak tree metal wall art. All available finishes are powder coated, so this wall art can be hung indoors or outdoors. Express your...

MSRP:
Sale Price: Sale Price: $161.95
Reg Price: $226.95
Bring a dramatic look to your walls when you hang this mountain scene metal wall art on a wall. All available finishes are powder coated, so this wall art can be hung indoors or outdoors. Express...

MSRP:
Sale Price: Sale Price: $92.50
Reg Price: $132.28
This charming 23.5" Boy Sitting on a Rock Statue will bring back memories and put a smile on your face every time you look at it. Features delightful details and antique finish. Accentuate your...